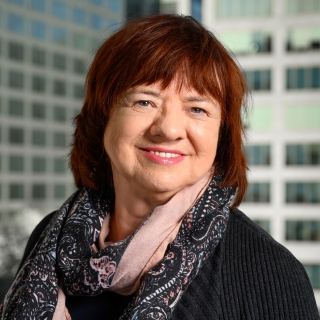 Born in Scotland, Anne Davidson has deep roots in Granville Gardens Housing Co-operative in Vancouver, where she raised her family and, after 30 years, remains an active member of the community

Now retired, Anne was president of the airline sector of the former Canadian Auto Workers (Unifor today), which represents workers at many employers across the country. She headed up a large volunteer executive and numerous bargaining committees and had charge of the Vancouver and Toronto offices with paid staff and substantial budgets to manage. Anne also served on the union’s National Executive Board.

At a later point in her career, Anne became Area Director for BC and Alberta, working with staff representatives and overseeing collective bargaining at various locals. On behalf of her union, she served on the Executive of the BC Federation of Labour.

Her volunteer work included a period as president of the Co-operative Housing Federation of BC. This experience convinced her of the value of strong partnerships between national organizations and regional federations of housing co-operatives. Elected to the board of the Co‑operative Housing Federation of Canada as the regional director for BC and the Yukon, Anne served as the president for four years and is currently a director at large.

Anne believes that decisions should be based on thorough discussion to which every interested party is encouraged to contribute. Her goal is always to find a solution that addresses the concerns of all regions and constituencies.

28% of Agency clients lost no money to vacancies last year. Good, if this means members chose to stay in their units. Bad, if new members moved into units that hadn’t been refreshed.