Each year CMHC produces rental-market reports for many parts of Canada. These reports are an in-depth look at the trends Canadians can expect to see in rental housing. Because CMHC’s rental-market reports for January 2020 covered only major cities, we asked Will Dunning, an economist specializing in market analysis, to take a close look at provincial trends. Here’s what he told us.

Ontario’s vacancy rate rose to 2.0 per cent in October 2019 from 1.8 per cent a year earlier. Clearly, more rental housing is needed to meet the needs of a population growing by 1.8 per cent versus a long-term average of 1.2 per cent. On the other hand, landlords’ aggressive rent increases have acted to stifle some of the demand that we would expect to see for rental housing. 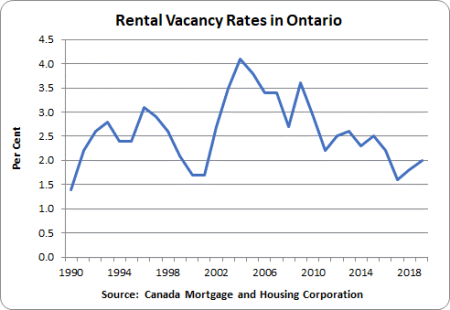 Statistical analysis for Ontario shows that the vacancy rate for a “balanced market” would be in the area of three per cent. Chronically low vacancy rates have allowed rents to rise, in real terms, by a significant average of 1.0 per cent each year during the past 29 years, and even more rapidly during the past three years. (In 2019 CMHC estimates that rents increased by 6.1 per cent.) In the current environment, Ontario’s rents will likely continue to rise quite rapidly.

Alberta’s vacancy rate is still retreating from the extraordinary peak it reached in 2016. The October 2019 rate of 5.4 per cent was fractionally lower than the 5.5 per cent rate we saw a year earlier. The falling vacancy rate has been due to slight higher employment levels, moderately strong population growth (currently 1.7 per cent versus a long-term average of 1.9 per cent) and a drop in housing construction. For now, new housing supply and demand are roughly in balance. 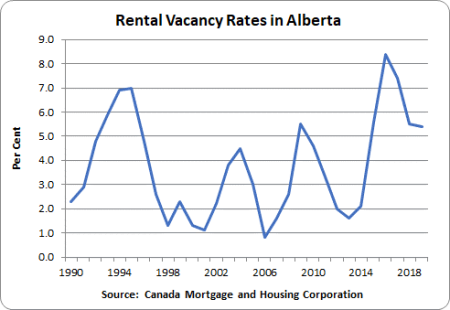 CMHC estimates that in 2019 Alberta rents increased by 1.3 per cent. Statistical analysis for Alberta indicates that the vacancy rate for a “balanced market” would be in the area of 4.5 per cent. With actual vacancies well above that threshold in recent times, “real” rents have slipped down, to some extent, from the very high levels seen a few years ago. However, even with these recent adjustments, during the past 29 years real rents have increased by an average of 0.8 per cent a year. With continued high vacancy rates, Alberta’s rents are likely to see only moderate increases.

As of October 2019, British Columbia’s vacancy rate had increased slightly to 1.5 per cent from 1.4 per cent a year earlier, but remains very low. This small reduction is due to increased production of new housing largely offset by moderately strong population growth (1.6 per cent versus a long-term average of 1.5 per cent). Currently, new housing supply and demand are roughly in balance, but more housing construction is needed to ease chronic shortages. 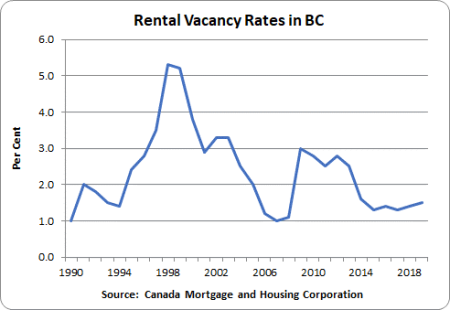 CMHC estimates that B.C. rents increased by 4.2 per cent in 2019. Statistical analysis for B.C. shows that the vacancy rate for a “balanced market” would be in the area of three to 3.5 per cent. With actual vacancies well below that threshold most of the time, “real” rents have increased by the substantial average of 1.2 per cent a year during the past 29 years. With housing production now more or less matched with the increasing need, shortages will persist, resulting in continued rapid growth in rents.

Prince Edward Island is experiencing extremely low vacancy rates. The rate of 1.1 per cent for October 2019 was higher than a year earlier (0.3%), but is still evidence of a severe housing shortage. Low vacancy rates have been due to a combination of much more rapid population growth (currently 1.8 per cent versus a long-term average of 0.7 per cent) and housing production that has not kept up with the demand. 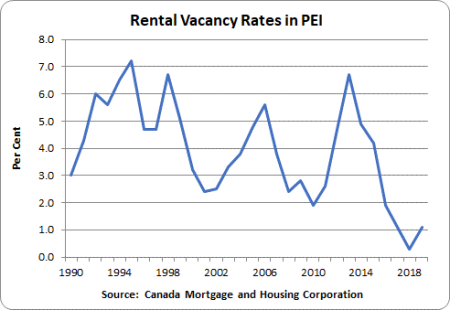 CMHC estimates that rents increased by 2.7 per cent in 2019. Statistical analysis for PEI indicates that the vacancy rate for a “balanced market” would be in the area of 3.5 to four per cent. (At that level, we would expect rents to rise by two per cent a year). PEI’s vacancy rates have usually been high enough to keep rents flat—or even falling—in “real” (inflation-adjusted) dollars. However, with the vacancy rate now far below that threshold, the province will almost certainly continue to see rapid rental increases.

Want to find detailed data on your city? Check out CMHC’s report database here. As always, follow the Agency on LinkedIn, Facebook and Twitter for all things co-op!

Back to News listing

Half the Agency's clients have member arrears and bad debts below $43 a unit, and half above. In 2007, the midpoint was $83. Great work, boards and managers! Members too!